Please allow plenty of time to travel, park and walk to Gate C (Amtrak gate) in Union Depot.  There are many one-way and limited-access streets around Union Depot.  Once you arrive at Union Depot plan on walking – the majestic building covers several city blocks!  Take time to explore the art and history inside the building.

Parking ~ There are three parking lots at Union Depot St. Paul. Click on Lot A, B, or C for map 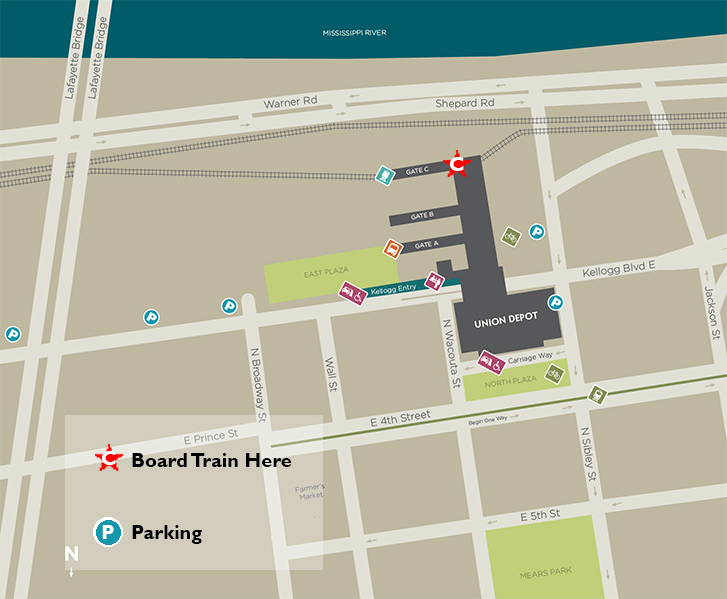 Lot A ~ the head house ramp, is enclosed and can be entered off Sibley Street near the Kellogg Boulevard intersection. Once parked just take the elevator up to Level 1 (head house, concourse or waiting room) to board the train at Gate C.

Lot B ~ can be entered off Sibley Street, between Shepard Road and Kellogg Boulevard, or from Kellogg Boulevard at the intersection with Broadway Street. This parking is covered as well. From the lot follow the signs to the Union Depot and take the escalators or elevators up to the waiting room to board the train.

Accessible drop-off locations are in the carriageway (off Sibley between Kellogg and 4th Streets) and at the Kellogg Entry (East Entry) at 240 E. Kellogg Boulevard. There are no strollers or wheelchairs for rent or loan.

Light rail and other transit:

The Green Line (light rail) from downtown Minneapolis, the University of Minnesota and the Midway area of St. Paul stops in front of Union Depot. After the Green Line arrives at Union Depot, walk through the head house, concourse and waiting room to board the train at Gate C. Many Metro Transit buses serve Union Depot either on the bus platform or at the intersection of Broadway Street and Kellogg Boulevard.