The 2019 North Pole Express is on the ready track to spread holiday cheer at Union Depot in St. Paul. The dates for this year’s trains are Dec. 6-8 and Dec. 12-15. The trains are operating later this year because the Thanksgiving holiday does not fall until Nov. 28.

Since 2014, No. 261 has been pulling the “North Pole Express.” The train operates on short runs on Union Depot property with a mix of bi-level and single-level equipment. It’s one of the Friends biggest fund-raisers of the year.

The train runs from the west end of the depot to its east end, where a special “North Pole” stage assembled at the Friends shop in Minneapolis has been moved into position. Each trip the train pulls up alongside the structure and Santa emerges to board the train.

The train has become a tradition with many families. The trains sell out every year – many passengers return year after year. In 2018 the train carried a record 12,500 passengers on 48 trips over nine days at Union Depot.

Volunteer coordinator Jon Strand is seeking at least 40 volunteers on weekdays and even more on weekends to staff the trains. In addition to the crews that operate the steam locomotive, volunteer positions that must be filled include sales, preparation and distribution of cookies and cocoa to children, first class service crew persons, car hosts, and Santa’s helpers. To make the volunteer process easier, the Friends are using SignUp.com for Boarding Platform, Santa’s Helper and Car Host Sign-Ups.

It’s dues time again for the Friends of the 261, but before I speak briefly about our activities and goals, I want to say thank you to all our members and friends for your generous support over the years. Thanks to your dues and donations, we’ve been able to keep 261 in operation and update our car fleet.

Thanks to your support, we are able to keep moving ahead. In 2020 we are planning more trips with 261, more car charters, and international tours. By renewing your membership, and making an additional donation, we will continue our progress.

Remember, your dues and donations are fully deductible under both federal and state income tax law, so if you act before the end of the year you can deduct the amount on your 2020 income tax return. You can renew and donate by sending the notice back by mail, or simply going to www.261.com.

Thanks again for your continuing support. I hope to see you on a Friends of the 261 excursion or charter in 2020! 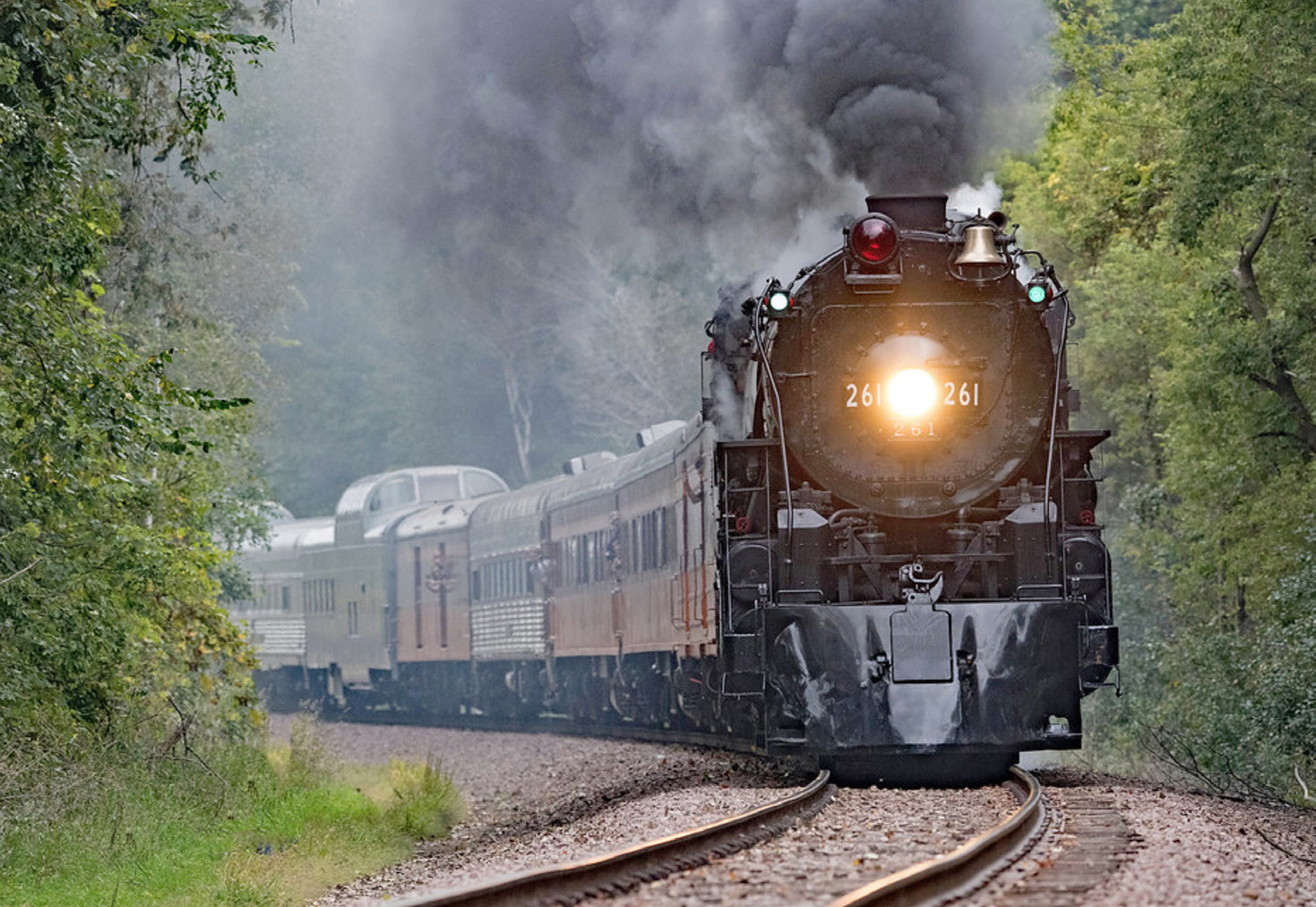 The autumn 2019 version of the Gourmet Express on the Twin Cities & Western Railroad operated Sept. 21-22. The special trips cater to passengers interested in unusual food and wine events and piggyback on similar trips operated in 2018.

The seven-hour trips traveled between St. Louis Park and Glencoe, Minn. The Friends had chefs on board the train to prepare meals, and wine tastings were conducted.

A stop in Bongards, Minn., was made for photo runs and to taste cheese from the Bongards Cheese factory adjacent to the tracks. The train included mostly first-class cars including for the first time three dome cars.

In a change this year, rather than departing from the Friends shop in Minneapolis, the trains loaded in St. Louis Park on tracks now owned by the Hennepin County Regional Railroad Authority (HCRRA). The agency acquired the tracks from Canadian Pacific earlier this year in conjunction with construction of Metro Transit’s Southwest Light Rail Line, which will involve relocating and rebuilding the tracks. Twin Cities & Western retains trackage rights over the route. The Friends have developed a new relationship with our Metro Transit and HCRRA partners that was facilitated by Metro Transit’s Ryan Ball. The agencies graciously allowed the Friends to park and load the train in St. Louis Park which proved to be advantageous since it eliminated a good deal of slow running between Minneapolis and St. Louis Park.

In addition to the Gourmet Express, the Friends operated special trains over TC&W for Loram Maintenance of Way, Inc. in conjunction with the Railway Interchange trade show held in Minneapolis Sept. 22-25. Loram is a railroad maintenance equipment and services provider founded in 1954 and based in Hamel, Minn.

On Sept. 23-24, approximately 200 railway executives from around the world boarded the special Loram dinner/tour train pulled by E9 No. 101/32A westbound and 261 eastbound from St. Louis Park to Chanhassen, Minn. At Chanhassen passengers left the train at a special platform built just for the event for a tour and reception at Paisley Park, the late entertainer Prince’s private estate and production complex.

“While LRT construction made boarding a bit more difficult, we are grateful for the cooperation we received from the Hennepin County Regional Railroad Authority and Metro Transit for their cooperation and assistance. Without their help the trips could not have operated,” Friends of the 261 President and Chief Operating Officer Steve Sandberg said.

The operators of the Autumn Colors Express, formerly the New River Train, chartered several Friends of the 261 passenger cars for trips out Huntington, West Virginia, Oct. 25-27. For 52 years the Collis P. Huntington Railroad Historical Society sponsored trips on the former Chesapeake & Ohio between Huntington and Hinton, W. Va. as the New River Train.

In early 2019 the society decided it would not operate the excursions after it suffered a financial loss at the conclusion of its October 2018 trips. The nonprofit society’s financial issues stem from cost overruns and cash flow issues as a result of what the society alleges as increases in Amtrak charter and tariff rates.

In July 2019, it was announced that Minnesota-based Rail Excursion Management Co., had reached an agreement with Amtrak and other stakeholders to resume the New River excursions under the Autumn Colors Express brand.

The new management group’s diesel-powered excursions operated on the same Huntington-Hinton route as the traditional New River Train. Rather than two weekends as the New River Train operated, the Autumn Colors Express ran on one weekend but added a Friday trip for three days of operation. The train was assembled in Chicago and operated as a deadhead special move from Chicago to Huntington.

Among the cars the Friends provided for the train were coaches Lake Pepin, Nokomis and Wenonah, dome Silver Palace, lounges Fox River Valley and Wisconsin Valley, Super Dome 53 and Skytop Cedar Rapids. The Skytop served as the eastbound tail car, while Pennsylvania Railroad Frank Thompson served as the westbound tail car. Organizers said they wanted the Cedar Rapids on the train because of its high number of seats and is such a unique car.

2019 was the 21st year the Friends have sent passenger cars to West Virginia for autumn trips. Chartering cars is another way the Friends helps generate revenue to keep our equipment in operation.

Friends of the 261 employees and volunteers have had a busy summer and fall at the Friends shop. Milwaukee Road E9A 32A has been receiving regular “tune ups” as it has operated over the spring and fall and crews become more familiar with the locomotive. One benefit of adding diesel power to the Friends fleet is it has drawn in younger people who are interested in diesels to work on the streamlined unit.

Contract work has kept the shop busy. As dome cars were added to the passenger car fleet, the Friends crew gained expertise in the specialized work of installing curved glass in dome cars. Having conducted this work on the three dome cars it owns, word spread in the private car industry that the Friends were the “go to” shop for getting dome glass installed. As a result, the Friends have received contracts from private dome car owners to work on their cars These projects have helped generate revenue that can then help with the maintenance and upgrade of the Friends car fleet.

One project that wrapped up in time for the Gourmet Express trips was the rebuilding and remodeling of ex-Union Pacific dome lounge observation 9001. The car, built for UP by American Car & Foundry in 1952, is the newest passenger car to enter service for the Friends of the 261. The Friends now has operational cars constructed by all three major dome car builders: American Car & Foundry, Budd Co., and Pullman Standard.

The Friends of the 261 is again offering a tour of Great Britain by steam train. The latest tour will run from May 6-15, 2020 and explore some of the most remote parts of England and Wales. The tour will travel by steam and vintage diesel trains in private luxury rail cars, through some of the most unspoiled countryside in Britain visiting the West Country Moors, Cambrian Mountains, Snowdonia, the Lakeland Fells, and the Moors and Dales of Northern England. The tour allows plenty of private time to sightsee and will offer extra guided tours of some of the most famous attractions.

Passengers will stay in area hotels of the highest luxury. The peerless Italianate village of Portmeirion in Snowdonia, where we will spend three nights, is one of the highlights.

Among the rail highlights are the Dartmouth Steam railway, South Devon Railway, double-headed by steam over one of the most remote and scenic railways in Britain – the Central Wales Line, steam on the North Wales Coast Railway, and one of the great Victorian feats of construction, the magnificent Settle and Carlisle Railway.

Included in the tour is nine nights’ hotel accommodations on a bed & breakfast basis, train travel on days 2, 4, 5, 8 and 10, luggage courier service transporting your luggage directly to the train to and from your hotel rooms, coach transfers between train and hotels, and staff on-board and at your hotels.

Pricing is as follows:

In addition to the steam tours of Great Britain, the Friends are also agents for Golden Eagle Trans-Siberian Railway luxury tours. These tours are offered at $27,000 per person.