After a four-year rebuild effort by the Friends of the 261, Milwaukee Road 4-8-4 No. 261 steamed again on Sept. 29, 2012. The locomotive last operated on Sept. 14, 2008, when it pulled a round trip excursion from Minneapolis to La Crosse, Wis., on BNSF Railway and Canadian Pacific. That evening its fire was dropped, ending a run in which the locomotive had operated at least once a year since 1993. Dismantling work then began for its federally mandated 1,472-day inspection, the engine’s biggest overhaul since it was rebuilt in Green Bay and Minneapolis in 1992-93. The Friends had leased the engine from its owner, the National Railroad Museum of Green Bay, Wis. The Milwaukee Road had donated the engine to the museum in 1956 as its first exhibit locomotive.

However, in early 2009 a dispute between the museum and the Friends over increased lease payments nearly led to the engine being permanently sidelined. Work stopped on the rebuild while the two parties attempted to come to an agreement. Unable to reach a deal, in November 2009 the Friends announced they were returning the locomotive to Green Bay for display. The museum then offered to sell 261 directly to the Friends, which finalized the purchase in May 2010.

The rebuilding effort then went into high gear. Parts were stripped off the engine, and in July 2010 a crane lifted the 227,000-pound boiler off the driving wheels, which were shipped out for quartering and to have the tires turned. Various appliances were rebuilt, an ultrasound inspection of the boiler was conducted, and staybolts replaced as needed. In December 2011 the locomotive got its wheels back, and in July 2012 it passed a hydrostatic boiler test, paving the way for final reassembly and fire up. The locomotive also passed its required inspection by Amtrak and is now Amtrak certified. 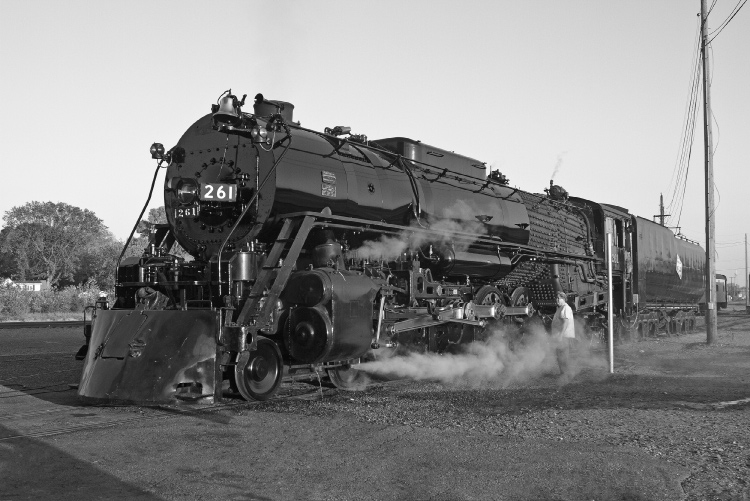 At 6:41 a.m. on Sept. 29, a fire was lit in the boiler of the 1944 Alco for the first time since 2008. All day the crew of Friends employees and volunteers conducted static testing of various systems, tested the boiler under pressure, and set the safety valves. Finally, at 6:14 p.m., Friends of the 261 Chief Operating Officer Steve Sandberg pulled the throttle, and the locomotive moved again, making several runs back and forth on yard tracks outside the Friends shop to check 261’s new spring rigging and side rod bearings.

There is still much work to be done. This winter lagging and jacketing will be applied to the firebox and inside the cab. Crews will finish installing controls in the cab of the locomotive, including new diesel multiple unit controls to allow diesels to be operated from the cab of 261. A new lubrication system will be fitted to lubricate over 40 locations on the running gear and chassis. A new Federal Railroad Administration-required narrow band radio and communication system will also be installed. Finally, the entire locomotive, tender and auxiliary tender will be painted. 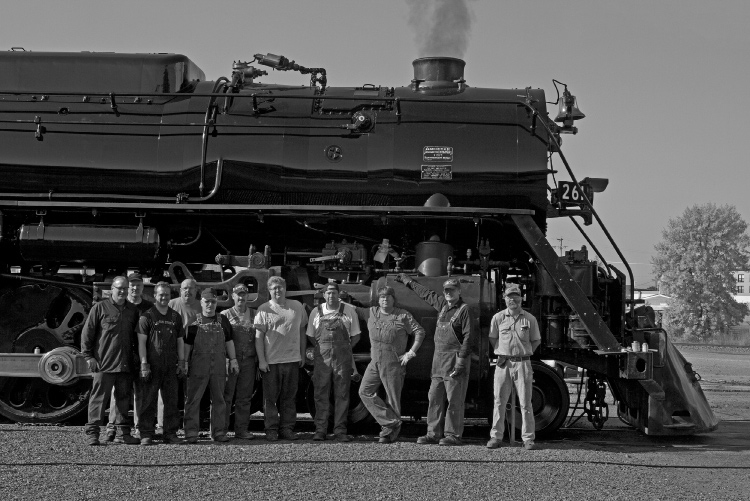 The steam crew poses shortly after the engine was first steamed up on Sept. 29. ©Steve Glischinski.

Before any excursions are operated, No. 261 will have to be extensively tested to make sure all the appliances and systems are working properly. The test runs will cost approximately $10,000 for the supplies, coal, and overhead costs to operate the locomotive. Without a source of revenue it is important that members make donations and renew their membership to help pay for 261 testing. Please consider making a donation by visiting www.261.com.

If all the funding can be put in place, the last of the rebuilding work completed, and test runs successfully made, the Friends of the 261 hopes to debut the rebuilt 261 on a public excursion from Minneapolis to Duluth, Minn. in May 2013.

The Friends of the 261 are making plans for Milwaukee Road No. 261 to pull its first public excursions since 2008. The locomotive has undergone a four-year rebuild that is nearing completion at the Friends Minneapolis Shop.

Preliminary plans, subject to necessary agreements and approvals from Amtrak and BNSF Railway, call for No. 261 to pull an excursion train from Minneapolis to Duluth, Minn., next May. The train would depart Minneapolis on May 11, traveling via BNSF Railway’s Hinckley and Lakes Subdivisions to the Lake Superior Railroad Museum in Duluth. The museum hopes to steam up Soo Line 4-6-2 No. 2719 to welcome 261 to the city, and it is possible the two steam locomotives may “doublehead” for a portion of the trip or on a separate excursion.

After overnighting at the museum, the excursion train would return to Minneapolis on May 12 over the same route as the day before. Ticket prices have not yet been determined, but assuming all the necessary approvals are received, tickets should go on sale after the first of the year. Once details are finalized, members will receive a special mailing announcing the trip schedule, ticket prices, and ordering information.

May 12, 2013 is Mothers Day, so plan on buying a ticket for mom so she can celebrate the return of No. 261 to service on her special day! 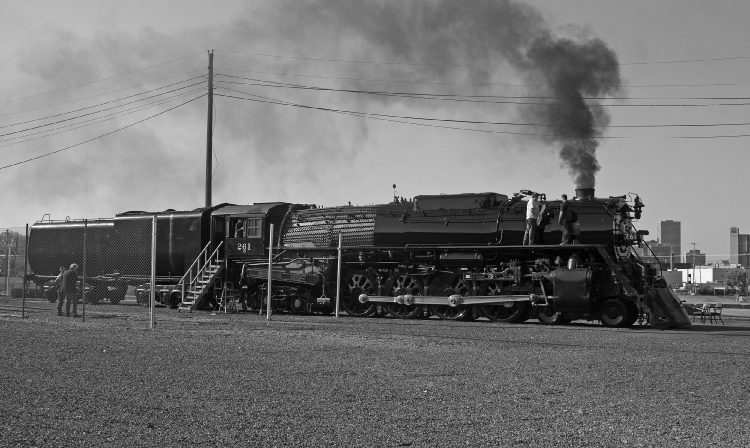 The Friends of the 261 will be sponsoring several private car charters on Amtrak trains in 2013, with more destinations available to patrons, including Montana.

The first charter trip to Chicago will depart St. Paul on Friday, April 19 and return on Sunday, April 21. Also on the schedule is the annual trip to the National Restaurant Association Show in Chicago. Departure from the Twin Cities will be on Friday, May 17, returning on Sunday, May 19. For 2013, the Friends may make the trip more of an “event” than in years past, with a possible wine and cheese tasting provided by local restaurants and/or retail establishments.

Another trip, still in the planning stages, is a six-day, five-night trip to Whitefish, Mont. The trip would be limited to approximately 24 guests and would utilize sleeping car Minnesota River, Super Dome 53, and business car Lamberts Point. Prices will be based on the type of accommodations desired – whether it be a roomette in the Minnesota River or a master bedroom in the Lamberts Point. Whitefish is a vibrant community located on the western border of Glacier National Park.

The Whitefish depot was built by the Great Northern Railway in 1927, and was designed in an Alpine style reminiscent of the chalets built in Glacier National Park during that era. Outside the depot rare Great Northern NW3 diesel No. 181 is on display, along with Great Northern “Bruck” No. 101. This unusual bus and truck combination provided connecting service between Kalispell, Mont., and Whitefish from 1951 to 1972, making up to six trips a day. Both No. 101 and 181 are painted in Great Northern’s Omaha orange and Pullman green colors.

As details for these and other charter trips become available they will be posted at www.261.com, and emailed to members who subscribe to the Friends of the 261-email list.

NEWS FROM THE CAR SHOP

Over the last few months, Friends of the 261 employees and volunteers have been busy working on the business car Lamberts Point. The car was always ‘ready to roll’ and was kept up to Amtrak standards, but the Friends decided 2012 was a good time to finish updating the car’s interior. The work included restoring the original woodwork once found in the car.

Work actually began in 2009. That year the Friends refinished Stateroom A before the car toured the country as part of Walt Disney Pictures promotion of the film A Christmas Carol. The room was redone with cherry woodwork from floor to ceiling, brass handles were polished, and new fixtures installed throughout. In 2010, Stateroom B was finished in the same fashion. This year, starting with the rear observation room and continuing down the hallway, all the old trimming was removed and replaced by new cherry woodwork. Crews fixed broken items and replaced any missing pieces. Now resembling the business cars of the past, the new woodwork is really something to marvel at.

Those members living in the Twin Cities area may have noticed that the only car from the Friends fleet at the Midway Amtrak station is the Lamberts Point. Usually the Super Dome can also be found at the station, but the car has been moved to the Harrison Street Shop for the winter. It has not been seen the inside of the Friends shop since 2005. It was brought over for several reasons, the main one being that it is just easier to do maintenance on the car at the shop. All the tools and supplies are there, and inspecting the dome car windows (there are over 40 of them!) is a lot easier from the upper platform of the shop.

With all the cars but the Lamberts Point at the Minneapolis shop, the Friends plan on tackling a lot of the loose ends in 2012-13. With the passenger cars traveling across the country the last several years, the list of smaller things that need to be done is getting longer. The majority of the items are so small that only our crew ever notices them. It might be a missing screw in a valance, or a door that closes too hard. These are some of the things that are on the ‘to do’ list. There are also ongoing projects, such as replacing the windows in Skytop observation car Cedar Rapids. We will replace the lower windows in the rear of the car which everyone looks through to watch the scenery pass by. Whether we can complete this project depends on funding from you, our generous donors.

The Friends are hoping to operate several charters with our cars in 2013. We are now are marketing the Lamberts Point for charters to points such as Chicago and beyond. During the day, the car can comfortably seat six to eight people, and has a large dining room and open platform. For details on chartering the Lamberts Point go to www.261.com.

In 2013 the Friends may expand our Amtrak charters by running a trip from the Twin Cities to Whitefish, Mont. This trip would be in addition to our regular Chicago trips. The Whitefish trip would allow passengers to ride the original route of the Empire Builder, which was inaugurated by the Great Northern Railway on June 11, 1929. The train was named in honor of railroad tycoon James J. Hill, known during his lifetime as the “Empire Builder.” GN operated the train from 1929 to 1970. The new Burlington Northern then ran it from 1970 to 1971, and since 1971 it has been an Amtrak train. It largely follows the route of the original Empire Builder except through portions of eastern North Dakota. We have not worked out all the details for the trip yet, but we will keep you up-to-date via the Friends email list.

With 2012 coming to an end tax season is right around the corner. Renew your membership by visiting www.261.com today and keep up to date on all things 261. Donations to the Friends of the 261, both big and small, are always greatly appreciated and are tax deductible.

Northern Lines is produced by the Friends of the 261 for distribution to members and supporters. Text in this issue was drafted by Steve Glischinski and Justin Young. Editor: Steve Glischinski