Information about the rebuilding of Milwaukee Road “Northern” steam locomotive #261 from the”Friends of the 261″ Inc.

1994 operating season off to impressive start

North Star Rail’s first full season of operating Milwaukee Road 4-8-4 #261 began in Minneapolis on May 8, 1994. On that day 92- year-old Frank Sandberg, Sr., a former Milwaukee Road engineer who ran the locomotive in regular service (and the grandfather of North Star Rail Chief Operating
Officer Steve Sandberg) once again took the throttle of261 for the first time in 40 years. Mr. Sandberg kicked off 261’s 1994 operating season when he ran the locomotive out of 261 ‘s winter storage facility at the Harrison Street engine house in Minneapolis.  Sandberg moved the engine back and forth several times on about 400 feet of track. According to  his son, Frank Jr., his father’s main comment was ‘it’s much bigger than I remembered it being.”

The next day, 261 departed Minneapolis on Wisconsin Central to begin a ferry move to Chicago, where a pair of trips on WC from Chicago to Burlington and Fond du Lac, Wis. would be operated on May 14-15. The ferry move involved only the locomotive and tool car from Minneapolis to Fond du Lac,
where the engine arrived late in the day on May 1 O after an overnight layover in Stevens Point. 261 remained in Fond du Lac the next day while, picking up a six car passenger consist. On Thursday. May 11, 261 and it’s train stormed south toward Chicago, tackling WC’s steep grade over Byron Hill (just south of Fond du Lac) with ease, a preview of the excursions to come. The purpose of the May 14-15 excursions were to help celebrate “Chocolate City Festival” in Burlington, home of Nestle’s Chocolate. On the ferry move to Chicago, a stop was made in Waukesha to pick up members of the press, who rode the train to 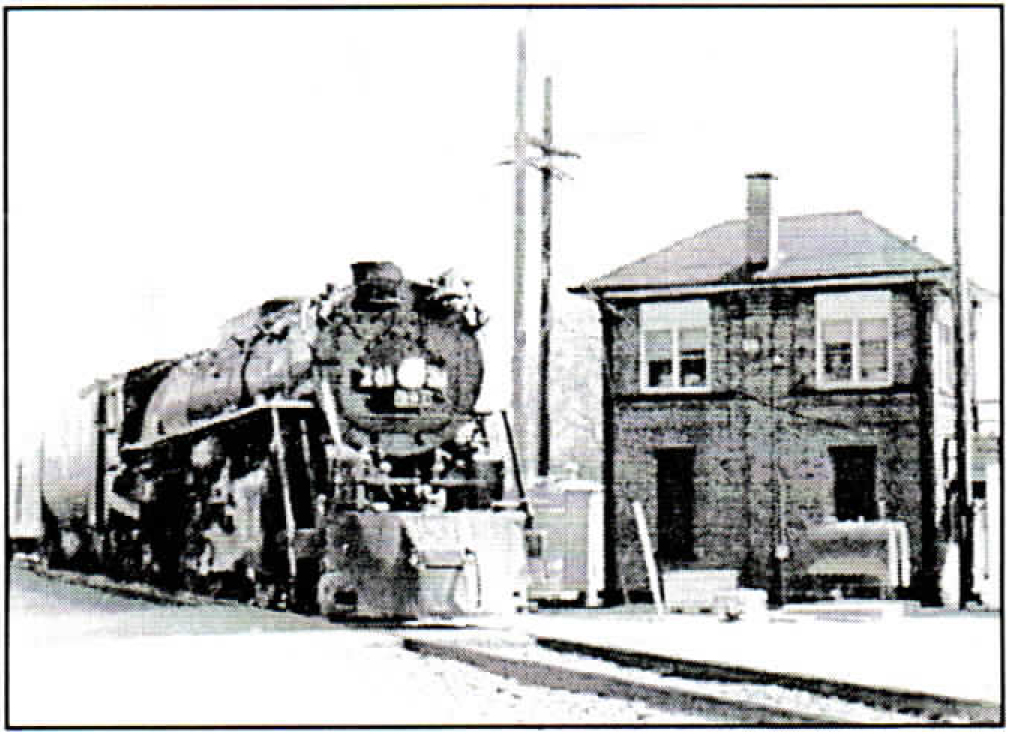 Burlington. The locomotive arrived in Des Plaines, base of Chicago operations, that evening, where a 19-car excursion consist was assembled. That evening the locomotive continued toward downtown Chicago, where it was to be turned at interlocking

tower B-12. Those plans had to be shelved, however, when 261 nearly turned over a rail on the wye track at B-12. Instead, the locomotive ran over CSX trackage to the Global One Intermodal facility where it was turned late Thursday night, as well as on subsequent nights. Much of the track age 261 traversed was along the busy Eisenhower Expressway. “It was really fun to see the reaction of motorists as we steamed by the freeway,” Steve Sandberg said.

The excursion trips from Des Plaines to Burlington and Fond du Lac that weekend ran very well, and 261 performed superbly. The only glitch was that watering the engine took longer than expected in Fond du Lac Saturday, but this was corrected the next day. 261 easily handled the 19-car train at track speeds, carrying a total of 2,400 passengers over the weekend.

On Monday, May 16, 261 headed north on WC trackage once again, this time on a ferry move to Green Bay, Wis. where the engine and excursion consist tied up early on May 17. The purpose of this move was to position the locomotive for two excursions to be operated June 11-12 on WC from Green Bay to Neenah and return, in conjunction with the National Railroad Museum. The trips out of Green Bay, which operated over former Fox River Valley Railroad trackage recently acquired by WC subsidiary Fox Valley & Western, were well received by the public and included a spectacular photo run-by at Wrightstown, Wis. on June 11. Unfortunately, following heavy rains that evening, the engine suffered a minor derailment on soft track while departing on the morning of June 12, and diesel power had to be substituted. The trip still was a hit for most passengers, and even included a run-by with the WC SD45 diesel!

Special thanks are due to Tom Michener, Wisconsin Central’s Manager of Security, who was aboard the Chicago and Green Bay excursions. Tom assisted us every step of the way, helping advise us on safety issues and crowd control. “Friends” and North Star Rail also wishes to thank all the WC employees who gave of their time to help us have a ~ operation. At the conclusion of the trips out of Green Bay, 261 was stored at WC’s North Green Bay roundhouse. North Star Rail is working closely with CP Rail System and Amtrak to operate trips this fall out of Milwaukee and Minneapolis/St. Paul on original Milwaukee Road trackage; see this newsletter for more details on these exciting trips.

“Friends” and NSR to participate In Operation Lifesaver

“Friends of the 261” and North Star Rail will once again be supporting Operation Lifesaver and the Minnesota Safety Council by assisting in staffing a booth at the 1994 Minnesota State Fair. Operation Lifesaver is a safety program sponsored by the railroads and the Council to promote grade crossing safety. This year, the Fair runs from August 25 to Labor Day, September 5.

Safety, both before and during 261 excursions, is an issue that we all must deal with. “Friends” volunteers all play a key role in helping to keep operations accident free. It is up to us to remind our passengers and observers not to trespass or climb on railroad property.

A new tape recording of locomotive 261 in action is now available. The new tape, titled “261 – The Last of the Milwaukeeans” features sounds of the 261 · on trips out of Fond du Lac in 1993 and Chicago and Green Bay in 1994, including the spectacular climb up Byron Hill and in-thecab recording.

The tape, produced by Whistlin’ Dixie Productions, runs 60 minutes and is available at a cost of $10, plus $2 postage and handling, from ”Friends of the 261,” 4322 Lakepoint Court, Shoreview, MN 55126. Also still available is Goodheart Productions video tape”261: The Power of the Milwaukee Road,” at a cost of $29.95 plus $3 shipping and handling. Please allow four to six weeks for delivery. Remember, proceeds from the sale of both tapes go to help keep 261 in operation. 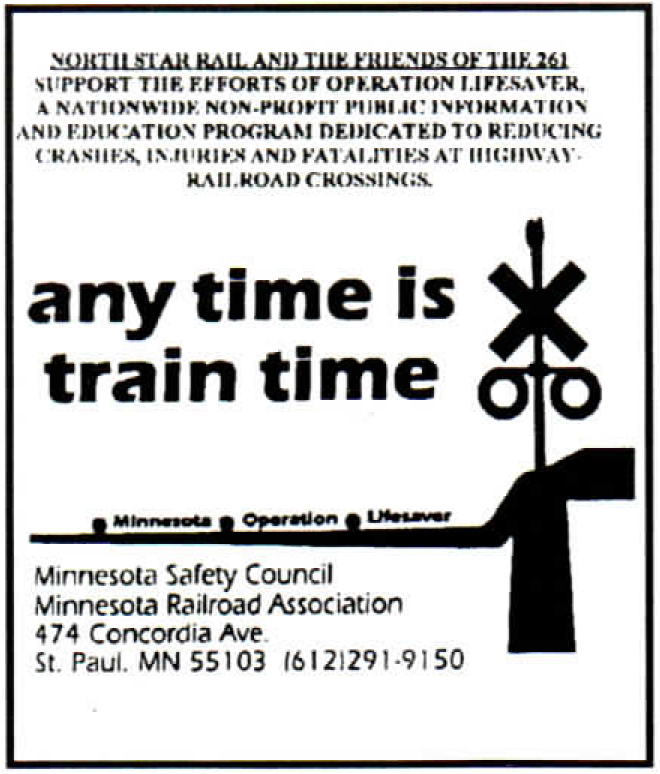 North Star Rail (NSR) recently acquired two coaches from the Fort Wayne Railroad Historical Society for use on Milwaukee Road 4-8-4 # 261 excursions. The two coaches, numbered 711 and 713, are both lightweight coaches which once worked for the Louisville & Nashville Railroad, serving on trains such as the “Pan American” and “Gulf Wind. “Plans call for the two cars to eventually be painted in Milwaukee Road colors to match NSR’s baggage tool car “Earling.”

Another addition to 261’s excursion consist is baggage theatrical car 710. Thiscarwasbuiltby Pullman for the New York Central, and was designed to carry scenery for the Metropolitan Opera. It regularly ran between New York and Chicago on the famous “20th Century Limited.” The car has been outfitted for use in selling souvenirs and beverages and was used in that service on the Burlington and Green Bay trips. It will also eventually be painted in Milwaukee Road colors.

North Star Rail hopes to acquire more cars in the near future so that the company can one day field an entire consist of cars for use with 261, or for lease to other groups for excursion trips.

© Friends of the 261. Archived Northern Lines Newsletters are copied from original wordings of letters sent out on the date in header. format maybe different from original letter but the articles remain the same. All addresses, contact info, promotions, discounts, and pricing in archived letters are no longer valid.