Information about the rebuilding of Milwaukee Road “Northern” steam locomotive #261 from the”Friends of the 261″ Inc.

(Above) 261 rests in the General Electric Service Center in Minneapolis. This fully equipped facility includes overhead cranes which can be used to lift
heavy parts off the locomotive. (Right) The rebuilt cab of the 261 rests near the locomotive at GE. The cab has now been placed back on the locomotive. 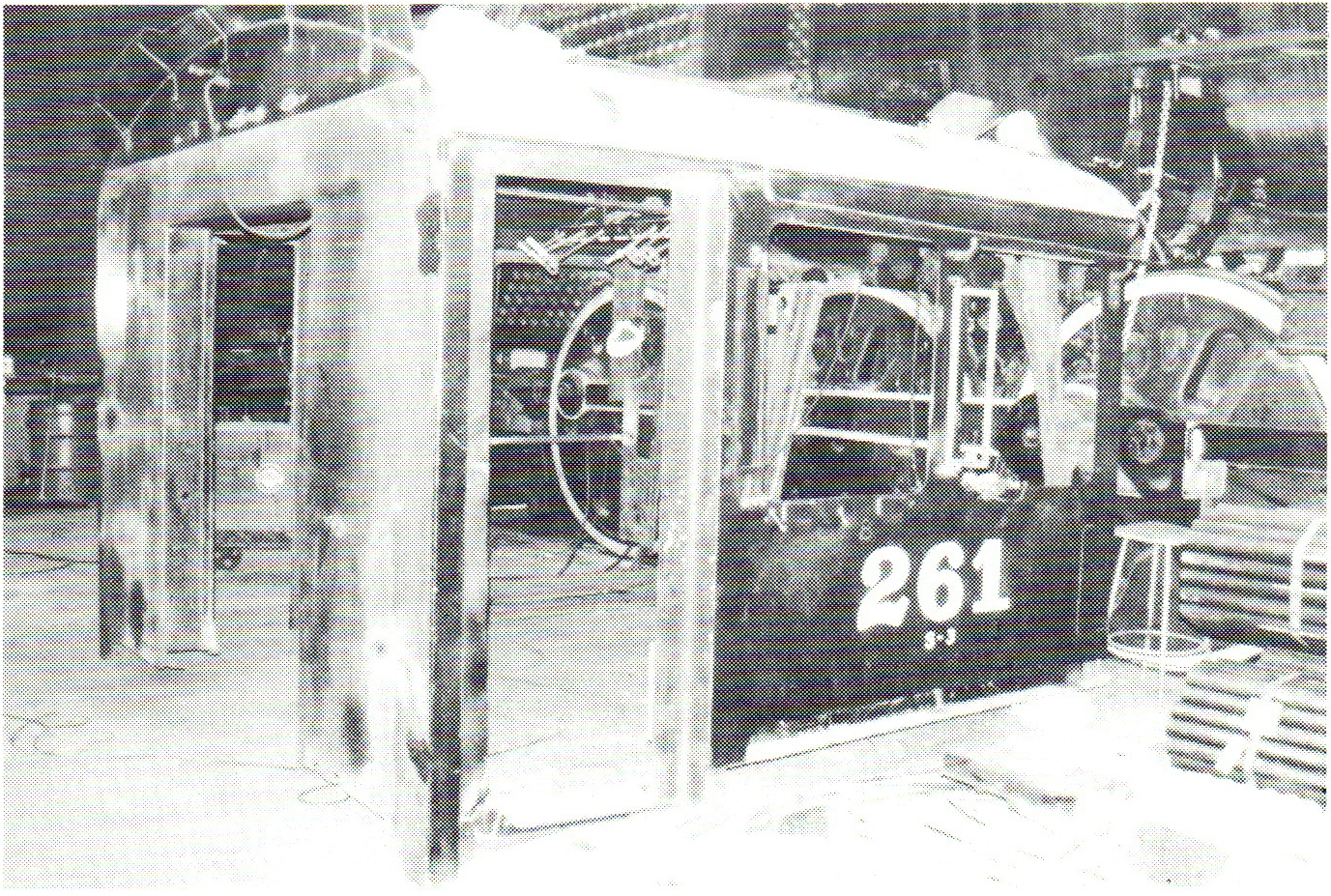 The program to rebuild Milwaukee Road steam locomotive 261 is continuing at a rapid pace at the General Electric Service Center in Minneapolis. At the present rate, it is expected the locomotive will be ready for its first test runs in June.

According to North Star Rail Chief Operating Officer Steve Sandberg, the approximately $500,000 project is right on schedule. “We are meeting our rebuilding goals,” Sandberg says. “While rebuilding 261 is a huge undertaking, so far things have come together very well.”

Since January 1993, boiler work has been substantially completed, including reinstallation of more than 250 boiler tubes. Preparations are under way to put water in to the boiler and perform a hydrostatic test to test for leakage. All steam valves have been dismantled, sandblasted, repacked, and reinstalled counting operating controls in the cab, there are 200 of these valves. A new sand dome has been fabricated and installed on the top of the boiler.

261’s trailing truck (located below the cab) has been trued and rebuilt, and the locomotive’s

Half of the 261 ‘s superheater elements have been replaced, with 1100 feet of tubing installed.

“We are happy with the work to date,” Sandberg says. “One of the most difficult aspects of the project is coordinating reassembly, and making sure we are getting the best bids from contractors. This uses valuable time, but in the end will be worth it,” he added.

Many companies have contributed to the rebuilding effort according to Sandberg. Among them are Con-Tek Machine, Diversified Rail Services, General Electric, Moorehead Boiler, Northern Rail Car, Soo Line Railroad, and Wisconsin Central Ltd.

As the rebuilding of Milwaukee Road steam locomotive 261 progresses, excitement is building among “Friends” members and North Star Rail personnel. The most frequently asked question is: “When will the 261 begin running again?”

The answer to this question depends on several factors. First, the rebuilding must be completed, with a successful test firing. Approvals must be received from the Federal Railroad Administration, which will inspect and certify the locomotive for service. After receiving the proper approvals and successfully steaming the engine up, a ”break-in” run will be made, with several stops to make sure different parts are “working in” properly. With the break-in run completed, 261 will be ready to run trips that are open to the general public.

Currently, North Star Rail’s timetable anticipates that the first steam up will be in early summer, probably June. Break-in runs will follow, with the first public excursions operating in September. “No dates have been set,” says Chuck Wiesner, Director of Operations and Development for North Star Rail. “We are still negotiating with several railroads, so it would be premature to talk about dates when operating plans have yet to be oonfirmed.”

When actual trips have been lined up, “Friends” members will receive special advance mailings with ticket ordering information before release of this information to the general public.

A video production company, Goodheart Productions, has been filming the 261 as its rebuilding progresses. Plans call for the video to be released approximately two weeks after the 261’s first break-in runs are completed, so that the video can be sold by the “gift shop” to be set up during 261 trips. Funds raised from video sales would be used to maintain the locomotive.

In conjunction with the 261 production, Goodheart Productions is attempting to put together a video program on the history of the Milwaukee Road, illustrating the railroad from the days of s team to the final years of its existence.

The company is seeking films (16mm, 8mm, or Super 8) of the Milwaukee Road that would include steam locomotives, electrics, streamlined passenger and freight units (such as El\ID “E” and “F” units) and modern diesels. Films showing either freight or passenger train operations are welcome.

All films would be handled with extreme care and will be returned after transfer to video tape, along with compensation if the films are used. If you have films of the Milwaukee Road or know someone who does, please contact Goodheart Productions, P .O. Box 47131 , Chicago, IL 60647, or call (312) 384-3804.

During the years 261 was stored and displayed, some items such as gauges, builders and trust plates, and other equipment disappeared from the locomotive. In particular, some of the gauges from the locomotive cab are missing which are essential to operate the engine. A reward is being offered for their return, no questions asked. If you know of the whereabouts of any of these gauges, or any other items used on steam locomotives which might be of value to the project, please call 612-490-1985 .

Membership in the “Friends of the 261” continues to grow.

There are now more than 150 members from all across the United States, including states as far distant as Maine and California, plus one member from Australia.

Nearly 150 people attended an “open house February 27 at the General Electric Service Center in Minneapolis to inspect firsthand the progress being made on the rebuilding of steam locomotive 261.

Representatives of General Electric and North Star Rail greeted the guests and conducted an introductory session in the GE conference room. In addition to “Friends” members, representatives of Twin Cities area railroads, members of historical and rail interest groups were among those attending.

Following the introduction, the tour moved into the GE erecting hall to view the locomotive. During the tour guests were able to step into the huge firebox of the 261 and check the progress being made on installation of new flue piping in the boiler. North Star Rail’s mechanical staff was on hand to answer questions and describe the rebuilding process underway.

“I think everyone had a great time. It was a wonderful opportunity to visit with other “Friends” says Judy Sandberg, “Friends of the 261” secretary.

Once 261 is running again, the locomotive will be able to sport two different “looks” thanks to clever engineering by North Star Rail, which is rebuilding
261. Two types of rectangular Milwaukee Road emblems have been fabricated for the tender: the older emblem, which reads “Chicago, Milwaukee, St. Paul and Pacific” that 261 wore when it was built, and the newer sign which simply reads “The Milwaukee Road” that the engine wore when it was placed in the National Railroad Museum.

The two sets of emblems will be changed out periodically to give the engine a different “look”.

On the front of the boiler, 261 wears a large red “Mars” warning light. These warning lights were added to Milwaukee Road’s 4-8-4’s a few years after they were built. The light will be placed on a removable bracket so it can easily be taken on and off. Depending on the “period” crews wish to duplicate, the engine may or may not have the Mars light in place.

Members who would like an opportunity to assist in the rebuilding of Milwaukee Road steam locomotive 261 will have an opportunity one Saturday each month. North Star Rail will designate one Saturday a “workday” for “Friends of the 261” members to come to the GE facility to work on projects – everything from cleaning and painting to general maintenance. In order to participate, you must call North Star Rail and make a reservation since access to the GE site is limited. To find out the date of the next work session and make your reservation, call North Star Rail at (612) 858-8859.

On April 6, North Star Rail announced the appointment of Chuck Wiesner as Director of Operations and Development. He will be responsible for day-to-day operations, and will assist with implementation of safety and educational programs, marketing and trip planning, and administration.

Wiesner also will be involved in acquiring rolling stock to be used with the 261. Wiesner comes to North Star Rail with many years of railroad operating experience, having worked with several railroads.

© Friends of the 261. Archived Northern Lines Newsletters are copied from original wordings of letters sent out on the date in header. Format maybe different from original letter but the articles remain the same. All addresses, contact info, promotions, discounts, rewards and pricing in archived letters are no longer valid.